The History of the Obi-Wan Lightsaber 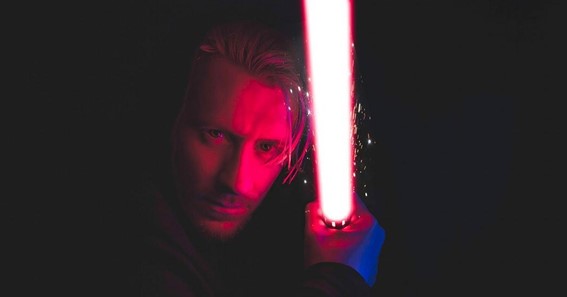 Originally portrayed by Alec Guinness, Obi-Wan Kenobi is one of the main characters in the original 1977 Star Wars film. The character only grew in popularity after Ewan McGregor was cast as a young Obi-Wan Kenobi in the Star Wars prequels.

Obi-Wan and Anakin are both known for their signature blue lightsabers, but did you know that Obi-Wan had three lightsabers throughout the film franchise?

So, keep reading to find out more about the amazing history behind the Obi-Wan lightsaber (to help keep a timeline, we’ll be discussing the lightsabers based on the chronological order and not the release date of the films).

The first lightsaber we see Obi-Wan Kenobi use is wielded by Ewan McGregor during the opening minutes of The Phantom Menace. The lightsaber is one of the more classic lightsaber options out there with a standard black and gray grip and blue blade.

Obi-Wan’s first lightsaber is based on that of his master Qui-Gon Jinn (played by Liam Neeson). Obi-Wan’s lightsaber is that of the quintessential Jedi; it reflects his dedicated and serene nature.

Obi-Wan loses his first lightsaber during his and Qui-Gon’s fight against Darth Maul. After Darth Maul defeats Qui-Gon, Obi-Wan and his lightsaber are kicked into a generator shaft by Maul. While Obi-Wan manages to hang on and later defeat Darth Maul, his lightsaber is unfortunately lost.

Lightsabers aren’t seen as disposable tools, and while the loss of his first lightsaber was unavoidable, it still wasn’t seen as behavior fitting of a Jedi. Nonetheless, Obi-Wan needed a replacement lightsaber once he was promoted to Jedi Knight.

Obi-Wan’s replacement lightsaber is almost identical to his first. Some fans even thought Obi-Wan had managed to retrieve his original lightsaber due to the similarities.

Unfortunately, this lightsaber doesn’t make it to the end of the saga, as this blade is lost after Obi-Wan is captured by Count Dooku on Geonosis. The lightsaber is never returned to Obi-Wan and he is forced to use a temporary replacement in the Battle of Geonosis.

After the loss of his second lightsaber, Obi-Wan doesn’t recreate his original blade again. This third lightsaber has a bulkier hilt, with an all-black grip and silver bands along the base. Obi-Wan’s final lightsaber also features a narrow gold neck, which none of his lightsabers had shown before.

Despite all the design changes, the blade is still Obi-Wan’s signature blue.

This design correlates with the design fans saw in Revenge of the Sith. These design changes were necessary to tie together the two trilogies. As such, this is the only design used by both Alec Guinness and Ewan McGregor.

This third lightsaber is built following Attack of the Clones and Obi-Wan uses it throughout The Clone Wars, during his battle with Anakin on Mustafar, and in his final fight against Darth Vader.

Unfortunately, we don’t know what happens to the final Obi-Wan lightsaber after Darth Vader defeats Obi-Wan. We can only assume the blade was destroyed when Luke Skywalker destroyed the Death Star.

The history of the Obi-Wan lightsaber is one of the more complex (but most interesting) stories in the Star Wars lore. Obi-Wan has consistently stayed true to his original teachings and the color of his lightsaber reflects this.

To Know Some Great Stuff Do Visit OwnerSites

To Know Some Great Stuff Do Visit PetsBee

To Know Some Great Stuff Do Visit PopularWeby