What Is Te In Football? 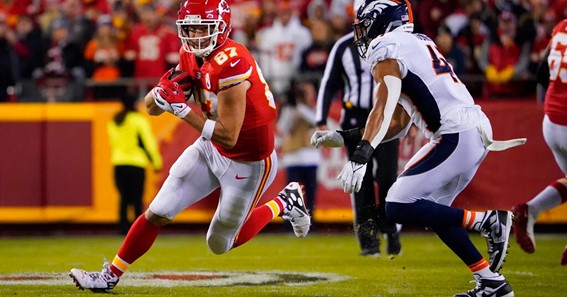 What Is Te In Football?

In football, the position of “TE” or tight end refers to a player who lines up on the offensive side of the ball, typically next to the tackle. Tight ends are known for their versatility and are often used in a variety of roles, including as a pass-catcher, a blocker, and a decoy.

The tight end position is a hybrid of an offensive lineman and a wide receiver. They are typically larger and stronger than wide receivers, but also have better speed and agility than offensive linemen. This makes them a valuable asset to the team, as they can be used in a variety of ways to exploit mismatches in the defense.

As a pass-catcher, tight ends are often used to catch short and intermediate passes, as well as in red zone situations where a team is looking to score a touchdown. They also play a key role in blocking for the running back, helping to open up running lanes and protect the quarterback.

Tight ends can also be used as a decoy, drawing attention from the defense and creating opportunities for other players to make plays. They are also known for their ability to make difficult catches in traffic, and for their blocking skills that can help protect the quarterback.

The role of the tight end has evolved over the years, with some teams using them more as receivers, while others use them primarily as blockers. Some teams also use multiple tight ends in a formation, known as “two tight end sets” to create mismatches and confusion in the defense.

In summary, in football, the position of “TE” or tight end refers to a player who lines up on the offensive side of the ball, typically next to the tackle. They are known for their versatility, and their role can include being a pass-catcher, a blocker, and a decoy. They have the characteristics of both offensive linemen and wide receivers, which make them a valuable assets to the team. The role of the tight end has evolved over the years and some teams use them more in specific ways than others.

Why Is It Called A Tight End?

A tight end (TE) is an offensive position in football.

Tight ends are some of the most talented and versatile players on the field. Depending on the play design, the tight end can serve as a receiver, ball carrier, or extra blocker. Keep reading to learn more about a tight end’s responsibilities.

What’s The Job Of The Tight End?

The role of tight ends can change depending on the philosophy of the head coach, but their main jobs are: to block for the running back or a quarterback who is carrying the ball, catch passes from the quarterback, and help create a stronger pocket by assisting fellow linemen in blocking during passing plays.

Who Is A Good Tight End?

What Is A Te In Football

What Position Is Te In Football

What Is Te In Fantasy Football

What Is The Te Position In Football

What Is Te In Football

How Many Tight Ends Are On The Field

What Does A Tight End Do In Football

Is Tight End Offense Or Defense

What Is Te In Football